No good contest can escape without a technical hitch and I have discovered that the Chow Down to Eurovision 2013 is no exception. Some of the clips of the contest have not been appearing on mobile devices of late, like all the best technical hitches it worked and then it just didn't. Like Spain's Azucar Moreno in 1990 when the music for Bandido didn't play and then started in the wrong place so they walked off before the band realised the music was playing so mimed along, there are solutions. I have included a link to the clip on the performer's name so that should help if the clips don't appear where they should.

Thankfully there has been no staged wardrobe malfunction like in Sweden in 1985, well not in the Chow Down to Eurovision 2013 anyway, there was a job interview where as I left my pants fell off! I got the job and for a much larger salary than was on offer, some how I must have given the impression I have the goods! (my version of the story and my therapist and I are sticking to it)

﻿
I also wanted to say thank you to all the readers that keep coming back and from so many places around the world. Don't be afraid to say HI, I'd love to hear from you and even get suggestions for next year's Chow Down to Eurovision.
I am really grateful for all the positive feedback I have received about my blog. It just goes to prove "Saucers" (fans of don't boil the sauce) are the best most brilliantest peeps in the world!
Some very kind Saucers have even voted for dontboilthesauce in the Australian Best Blogs 2013, voting ends today so if you haven't already voted (Hint!Hint!)

Thank you all again so much, oh and don't worry I have now bought a pair of braces! It's panties on all the way! 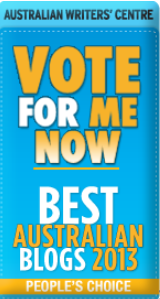