Chow Down to Eurovision 2013 - Belarus

Dobry Vecher,  Ladies and Gentleman we have landed in Belarus. Since their first participation in 2004  Belarus has never failed to delight, amuse, shock and appall. Anastasiya Vinnikova summed up my true feelings about Belarus in 2011, I Love Belarus, ('got it deep inside').
The Queen of Belarusian Eurovision is former MRS Russia Angelica Agurbash, who in 2005 brought us "Love Me Tonight" which some of us did more than others, she came 13th in the semi final. 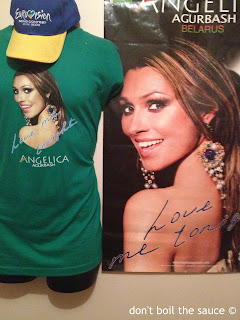 Yes, I have an Angelica shrine
Every Google search for Belarusian cuisine came up will lots and lots of potato pancakes, Drakini. I tried a couple of versions and in the end based this recipe from a Russian clip on Youtube, I followed the pictures. I have taken inspiration from Angelica and used a filling in the centre to create that age old Eurovision standard, the reveal. After hours of watching Love Me Tonight I knew there were only 2 ingredients that could possibly do, cheese and mince. 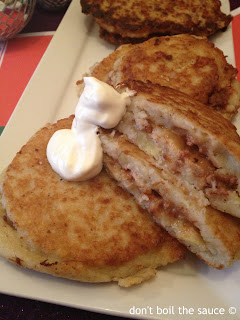 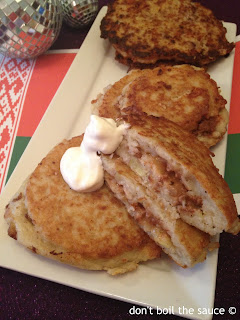