Chow Down to Eurovision 2013 - Serbia

It is hard to believe but we are already in Serbia, the final country of the 16 competing in Semi Final 1. We have a vegetarian appetiser today so that if you choose to host a party and cook all 39 dishes to celebrate the Eurovision weekend there will be something for everybody. It is a weekend for us in Australia due to the time difference and the way it is broadcast on the Friday, Saturday and Sunday nights. I still watch it live on the internet but it is fantastic to immerse yourself in Eurovision for 3 solid days because you have to replay it and then replay past contests and play the cd's and ......I'm not going to be on that strange obsession show am I???

I couldn't decide between which of the Serbian past contestants to include so we will be getting a bonus track. Both acts have pretty impressive hair, the first being Marko Kon & Milaan from 2009 placing 10th in the semi final. The second entry is from 2011 where Nina reached 14th in the final. It may have been due to her slightly more sensible hair. 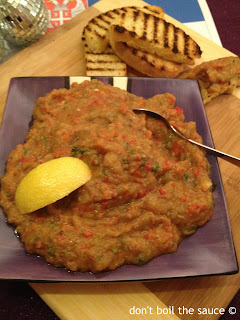 It is not the most photogenic dish in the Chow Down to Eurovision 2013 but the flavour is douze points all the way. 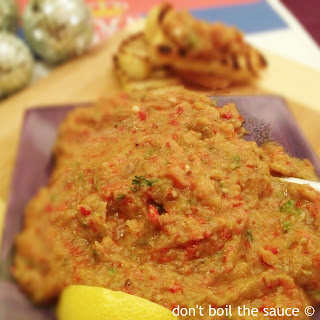 In May Moje 3 will bring their song Ljubav Je Svuda and what promises to be excellent hair once again.
срећно!

Email ThisBlogThis!Share to TwitterShare to FacebookShare to Pinterest
Labels: Chow Down to Eurovision 2013, eggplant, Serbia