Chow Down to Eurovision 2013 -Estonia

Firstly a warning, some readers may find some pictures disturbing.

Today we have had landed in Estonia and our most adventurise recipe of the Chow Down to Eurovision 2013, cue the pig head or Kyle as I have come to know him. It was a bit of a challenge at first having Kyle look at me as I was about to chop him in two, but we made friends and got through it. That was the secret really, give him a name and thank him for his contributition to the blog and eurovision, talk about how he would be a celebrity and just never look him in the eye. I discovered this recipe on an Estonian website that has a series of how to videos, and thought sometimes an entrant just needs that special wow shock factor, thank you Kyle. 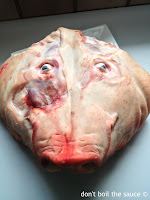 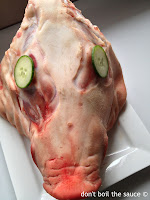 Doing much better after a trip to the spa, well clearly not that much better.
I'm really happy I went through with it but the flavour of the end result wasn't that great, there may be something lost in translation, or my missing celeriac. I love brawn but the stock was lacking some punch. I have included the recipe as written but I still have half of Kyle in the frezzer so will try again one day and update the recipe with any changes I make.
Estonia won eurovision in 2001 with "Everybody" by Tanel Padar, Dave Benton & 2XL but todays musical treat comes from Tanel's sister Gerri in 2007. This is dedicated to Kyle as for this meat jelly experience we were true parnters in crime. 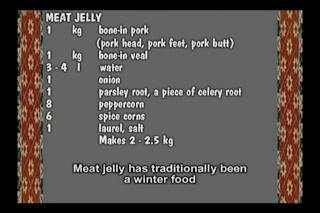 This is the original ingredient list but I needed to vary the meat as they must have really small pig heads in Estonia as Kyle was 4 kg. 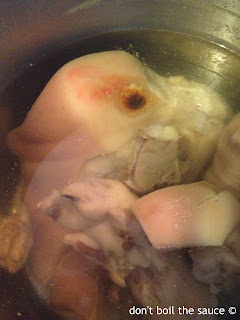 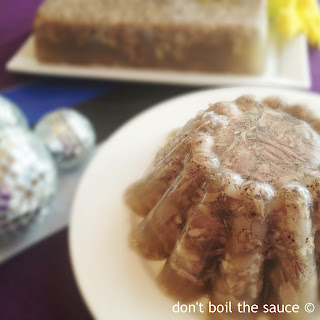 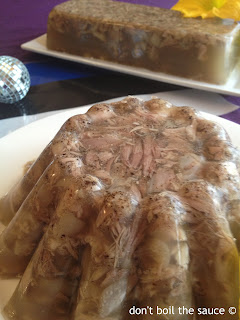 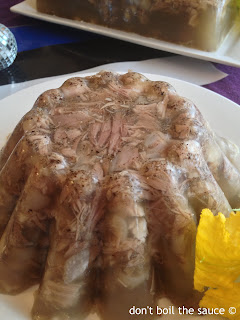 Et Uus Saaks Alguse will be sung by Birgit for Estonia this year.
Õnne!

Email ThisBlogThis!Share to TwitterShare to FacebookShare to Pinterest
Labels: Chow Down to Eurovision 2013, Estonia, meat, pig