Chow Down to Eurovision 2013 - Denmark

Denmark has a special connection with Australia through Our/Their Princess Mary so I wanted a dish that had a touch of both countries. Apples are the theme ingredient as Princess Mary is from Tasmania where they produce wonderful fruit. I thought that this was a little bit more classy than using beer because they met in a pub, yep I'm all class. Speaking of class I did have a trainer whose dogs had met Princess Mary, I'm not sure where that puts me on the Kevin Bacon degrees of separation scale but I think we are practically BFFs.


Technically Denmark did not break the 6 person limit on stage rule in 1988 as one of the people was inside the singer, well at least for another 3 weeks anyway. 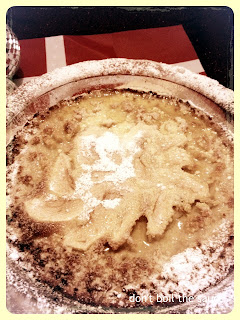 A variation is to not add the grated apple mix into the batter but add it to the top of the cooked pancake. This will let the pancake rise higher like a Yorkshire pudding.


I hope there wont be "Only Teardrops" for Emmelie de Forest this year in Sweden.
Held og lykke!

Email ThisBlogThis!Share to TwitterShare to FacebookShare to Pinterest
Labels: apple, Chow Down to Eurovision 2013, Denmark, pancake