Chow Down to Eurovision 2014 - Belarus

добры вечар (dobry viečar) this is Belarus calling, home to the Eurovision spectacular and featured artist in Chow Down to Eurovision 2013, Angelica Agurbash.

This year's artist Teo provides a Chow Down to Eurovision gift by performing another food titled song, Cheesecake.

At first I thought this dish would be a piece of (cheese)cake, a smooth and creamy baked cheesecake with blueberries or perhaps a savoury crab cheesecake.
Well then I thought I'd be a bit clever and well you know, it's Belarus so it should be Belarus in the cheesecake.

So while I felt my life was completely "tied up in their sweet cheesecake" the thought I clung tightly to throughout was I Love Belarus!
Anastasiya Vinnikova performed I love Belarus in 2011 and while I loved Belarus it seems not many others did, they came 14/19 in the semi final


Sadly for the first time in Chow Down to Eurovision history, we have a country who has a tale to tell but not the recipe.
Trying to create the flag of Belarus in cheesecake has invaded my every thought process for months now.
Would it show the flag as you looked down on it? But then you could end up with a slice of just red or just green...
Should it be in a loaf tin so it's a rectangle?
Should I cut away the side and then add more for the white embroidered motif?
Maybe I could use a tuile as the side border?
Could I make a rectangular macaron?
Ok I'll temper white chocolate and add freeze dried raspberries....but it shouldn't be a sweet cheesecake, Teo sings he doesn't want a sweet cheesecake.
You can imagine the fun and pain I have had with this cheesecake!
I'll take you through some of the prototypes and where I ended up. I wont be including a recipe in this post as I'm not at the point that I could in all fairness publish something I was sure worked, and tasted great. 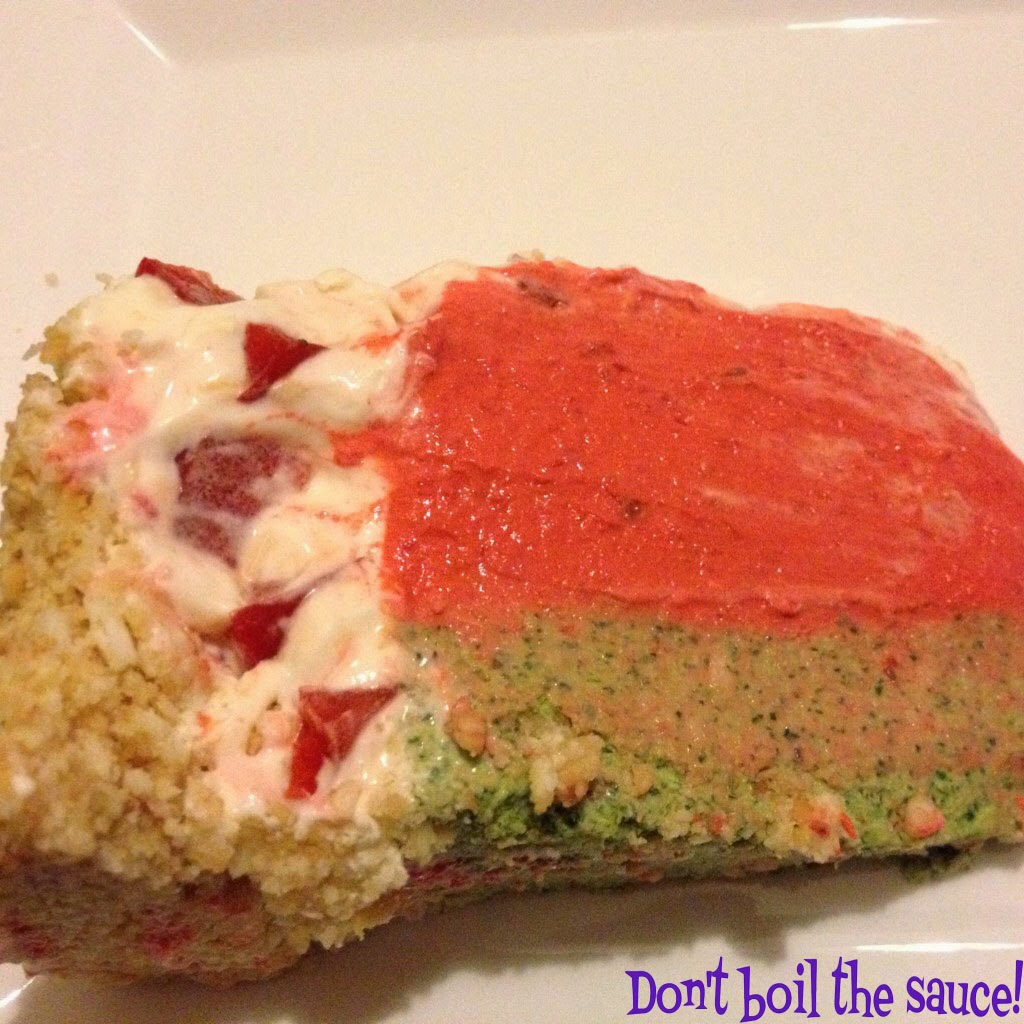 The savoury roast tomato, basil pesto and capsicum cheesecake, the flavour of the pesto was quite enjoyable but the rest got a big no from me. 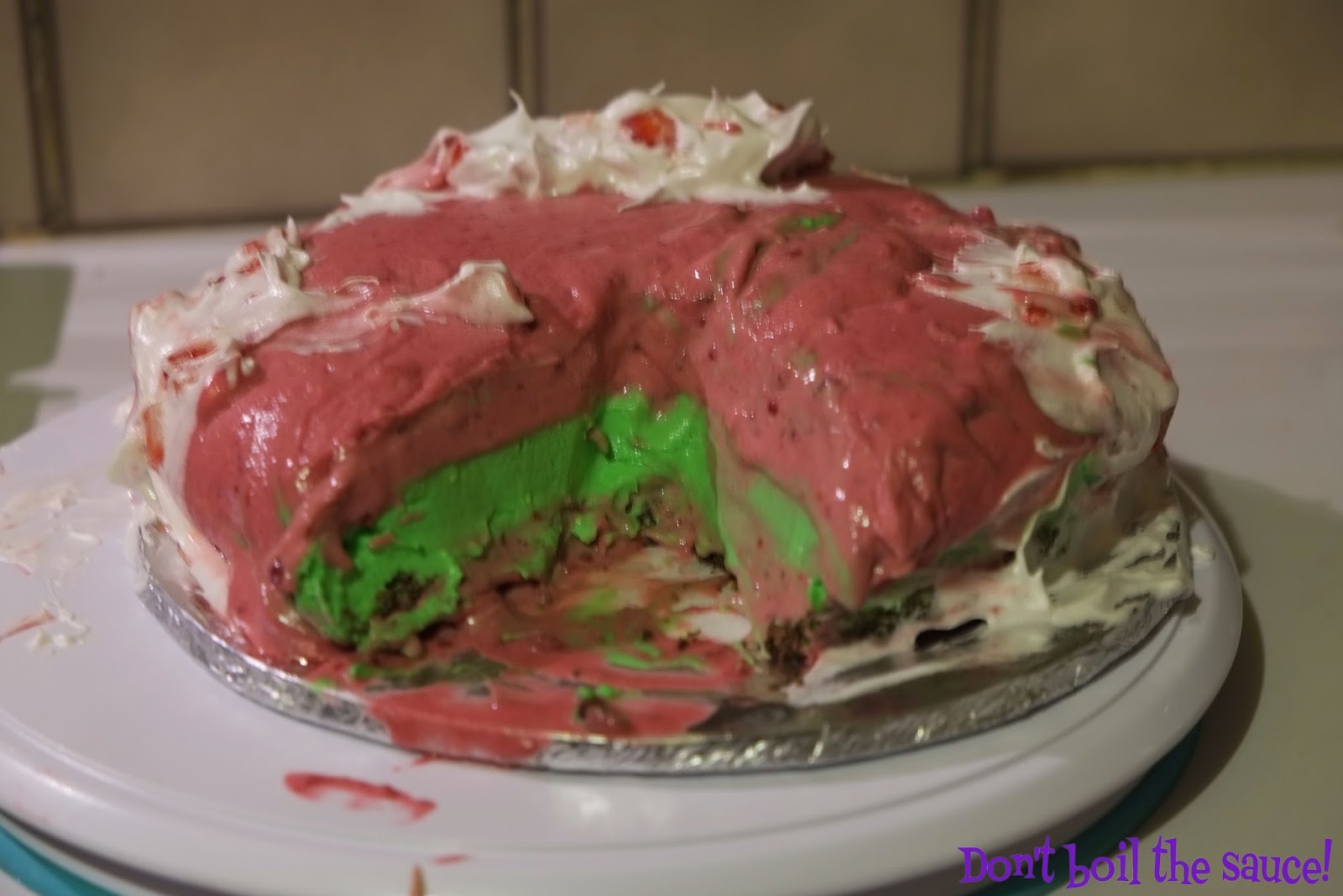 The sweet raspberry and pandan cheesecake was a bit of a flop....literally!
The pandan was the winner in this one, so it seems I am ok at the bottom layer.
There is also some Italian meringue with strawberries as I thought this could look like the border when cut.
There was no way it was going to stick on that one..... 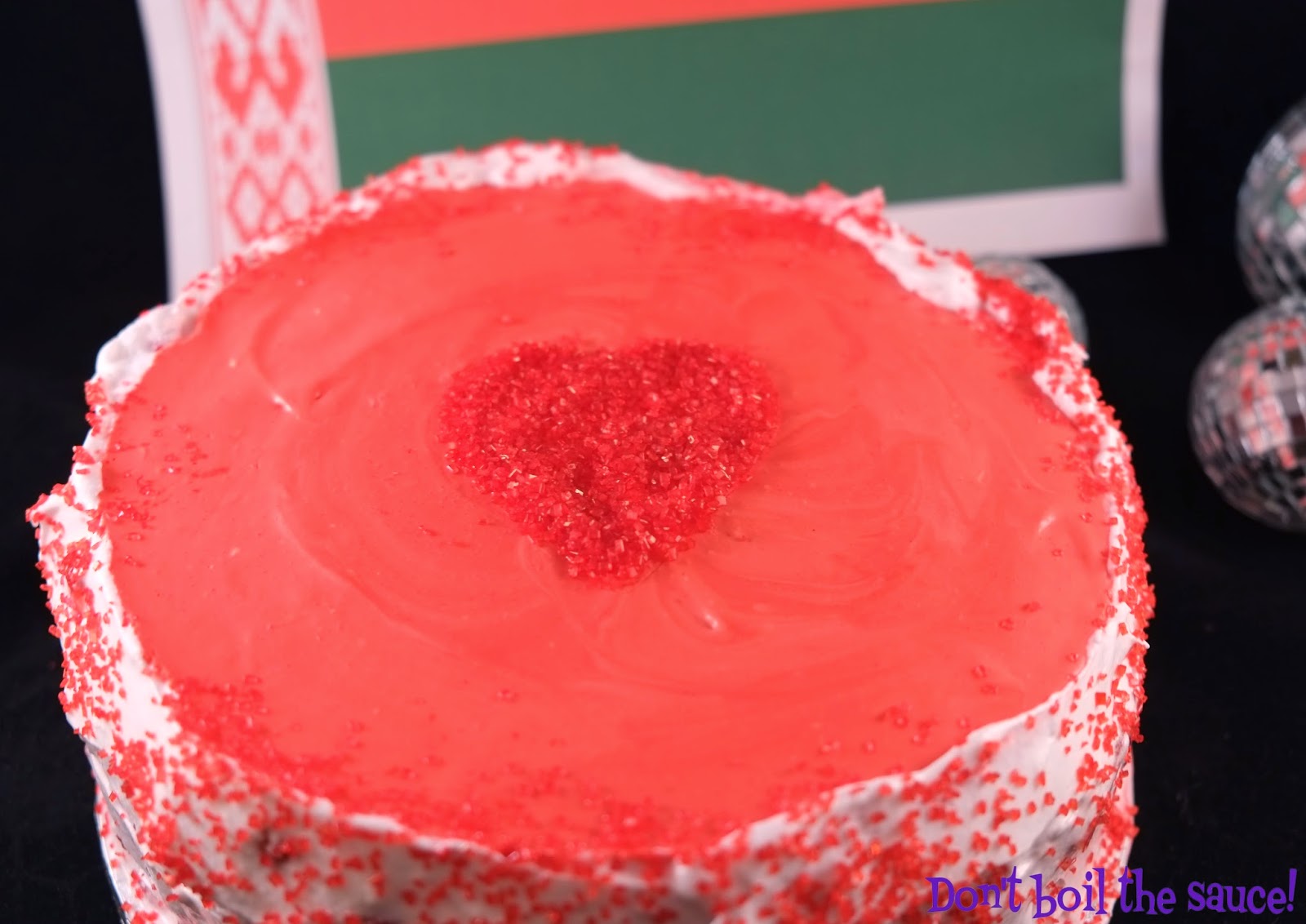 I'd remembered singing at the Gunning Flower Show about a million moons ago and being given a jelly cheesecake slice for afternoon tea.


OK so jelly, the colour should work and it should definitely hold it's shape. 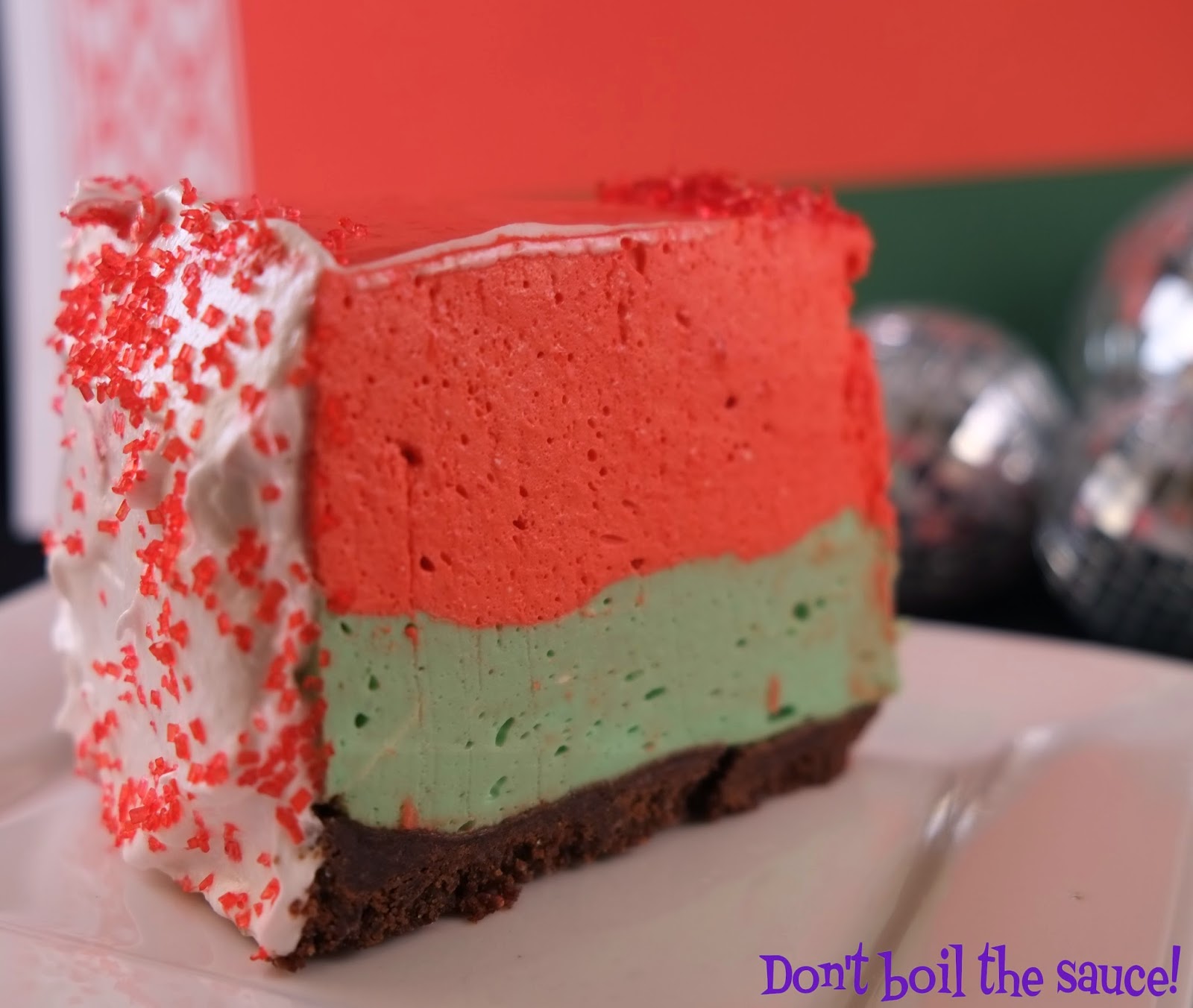 There is no chance of this cheesecake not holding it's shape, if you threw it at a wall it would only bounce back. 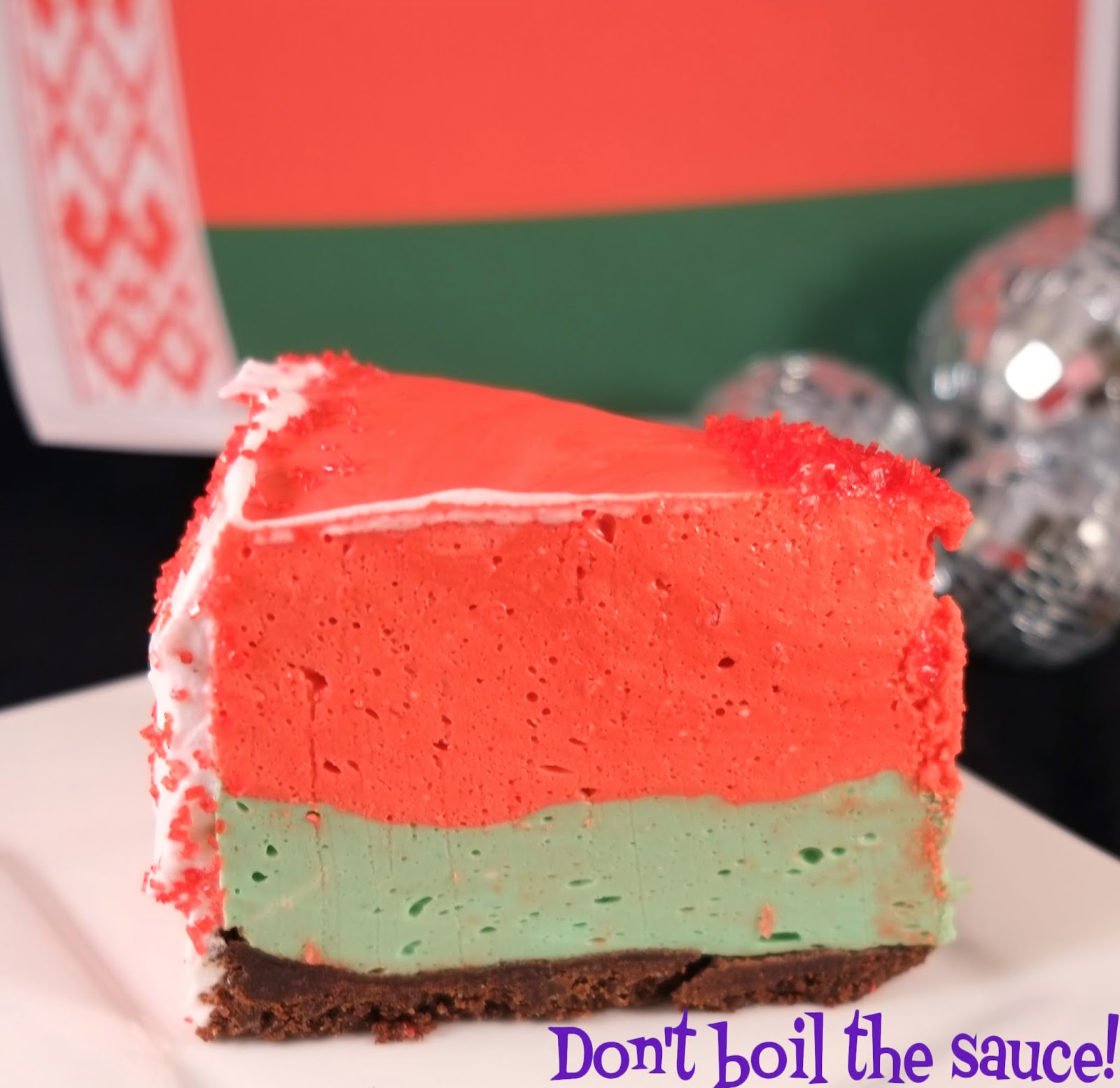 There is more Italian meringue and strawberries but I think a cake boarder is the way to go.....only time will tell.
So while I don't consider my adventure with Belarusian cheesecake a complete epic fail, it is something I will keep working on so I can publish a recipe I'm happy with in the future.

The Don't Boil the Sauce philosophy is really just about having a go, so I'm actually ok with showing you that sometimes it just doesn't happen the way you want it to.

Who knows, everyone loves an underdog with a back story, so perhaps Belarus could go on to win Chow Down to Eurovision 2014??? After all I Love Belarus!

Teo will dish up a far more polished cheesecake in the second semi final, so let's hope he doesn't need to rely on Google maps for directions and heads straight into the final.

Email ThisBlogThis!Share to TwitterShare to FacebookShare to Pinterest
Labels: Belarus, Chow Down to Eurovision 2014