Chow Down to Eurovision 2013 - Greece

Today the Chow Down to Eurovision 2013 arrives in Greece although this will be a return trip for AB and I as we got to see the monsters conquer Athens in 2006 first hand.

Wise people often say it's not about the destination but the journey so if you don't mind I might indulge myself in a trip down attending Eurovision lane.

Like all good Australians our 3 weeks in Europe crammed in London, Paris, Athens and Rome, because after 30 hours in the plane you want to get your money's worth.
We left Heathrow on an evening flight for Athens but not before we managed to pick up Mr and Mrs Portokalos both lost and looking a bit weary.

In amongst the pant wetting excitement of actually going to a host country (it really doesn't take much to excite me) and the void of a delayed flight, I had a mobile phone thrust at me with the right amount of pleading waving for me to take it and say...hello?

Nikos the (grateful for making them someone else's problem) voice on the other end explained the stressed couple before me were his parents who only spoke Greek and didn't know what was happening with the flight home. I promised Nikos to get his parent on the plane and even tried to let them know why the flight was delayed using my phrase book, poor things as if they hadn't already been through enough.

Our flight was called and we ensured that Mr and Mrs Portokalos were seated with their seatbelts firmly secured, seat backs and tray tables in the upright position before we bid them farewell.

I had thoughts of Nikos waiting at the airport to shower us with gratitude at which point he would turn out to be the head of the Greek Eurovision committee. I'm not sure where the story went but some how I ended up winning the Eurovision Song Contest, the way all good stories end. Alas no it was not to be, zippo at the airport not even our prepaid and arranged hotel transfers was there to meet us.

I guess I should be grateful we even arrived in Greece as it was the scariest fight I've ever been on.
All the joy of hearing Anna Vissi the 2006 Greek entry upon boarding fled once we took off on the most frightful roller coaster ride of a flight. Now I love a really bumpy flight, it adds to the drama. I loved flying Impulse when they were operational in Australia as the cabin had hand rails on the overhead lockers like a bus and I'd wait for the captain's mid flight announcement "cabin crew be seated...NOW!"

As we rose and dropped and rose and dropped all I could think about was how pissed I'd be if we crashed just before I got to Eurovision, I was totally fine if it was on the way home but to miss out so close and what about poor Nikos and the Portokalos!

The worst moment was when water started leaking from the window onto my arm, an apparently harmless phenomena, but not to me at the time as I started deciding which God would be the best one to turn too.

AB slept through the whole journey.

I'll fast forward to the Greek tragedy part of the trip the saga of Labrina the travel agent. She was a hefty girl (see it's not wise to cross me) who was originally from Melbourne but was now  working in Athens. After numerous emails we bought our accommodation and package of Eurovision tickets through her agency.

Just a word of warning to everyone Eurovision does not sell tickets through travel agents, we are now fully aware of this.

We had paid top dollar for all A reserve tickets but when it came to picking them up they didn't quite have what we ordered and offered us C reserve. While disappointed I thought well the difference in price can be spent on merchandise, but no they were the same price, WHAT?!?!?!?

We had the option of that or nothing and no refund either way, and had to sign a paper stating we wouldn't take it further before any tickets were exchanged. (We did take it further with our credit card fraud squad but to no benefit)
Feeling beyond angry, stupid and a bit helpless we grabbed what tickets we could and raced out of there towards the arena for the first dress rehearsal. It was when we arrived there it finally made sense why she didn't understand our need to rush to the venue as not only did we get tickets in the wrong section they were for the wrong bloody day!!!!!
Once we bought more tickets and were in the arena for the dress rehearsal our week of Eurovision bliss began. I know I have focused on some of the drama but if I had to write about the sheer life changing happiness of being at Eurovision the post would be days long, so I should probably stop boring you and get on with the food.

I adored all he Greek food and enjoyed the benefits of the communication barrier by miss ordering too many souvlaki with chips and mustard. There was also a lot of hospitality on offer at the restaurants after the concerts with the tattoo on full display we would be given free drinks as they either thought I was a contestant or a wack job that would permanently mark their body for a song contest.

After the most enormous plate of grilled meats we scored some ouzo with so much chest hair inducing potency I swear it was "draino"!

The recipe today is simple and inspired by that Greek plater and not able to be used as a cleaner I promise.

There are so many Greek Eurovision hits I could use for this post but in memory of our time in Athens I will go with Anna Vissi. This song was played 24 hours a day in every public building, shop, café, aircraft and toilet for the whole time we were there and boy did they get cross when she lost!

Don't worry I still spent money on merchandise to add to the Shrine and got my hands on every give away. 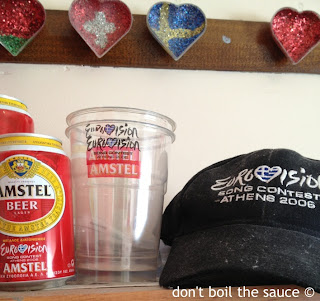 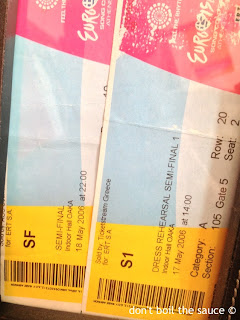 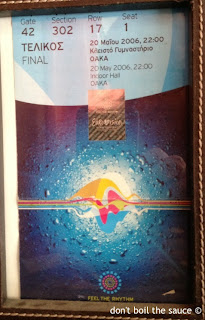 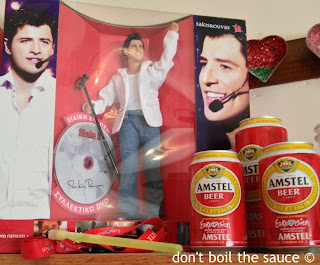 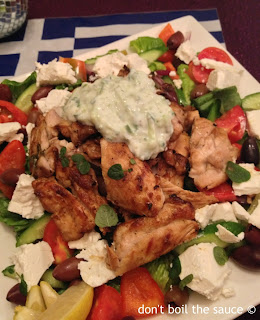 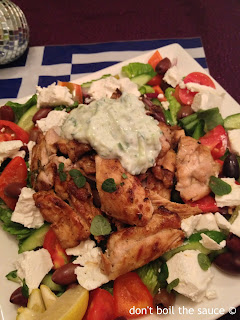 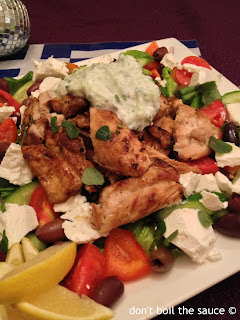 Now appropriately to my own Greek experience this year Koza Mostra feat. Agathon Iakovidis will perform Alcohol is free. Who doesn't love a bloke that can rock a skirt?
καλή τύχη!

Email ThisBlogThis!Share to TwitterShare to FacebookShare to Pinterest
Labels: chicken, Chow Down to Eurovision 2013, Greece, salad