Chow Down to Eurovision 2013 - France

Bonjour, bonsoir, bienvenue Madame et Monsieur, while French is an official language of Eurovision if I keep going on with this things could get messy.
France is famous for its cuisine and today's recipe comes from a Frenchman I worked with several years back, let's call him François shall we.

He was 6 foot, early 40's salt and pepper hair with more salt than pepper and always dressed with such style people would actually swoon.

I used to find it hilarious that when he spoke, not a word of a lie, there were times when people audibly gasped. One day while dodging lusty bypassers we were discussing offal as one does.

He told me of a childhood treat of pan fried liver with raspberry jam, I told him he was nuts but as adventurous as ever I had to try it.
While his voice did nothing for me I did love his liver, you know what I mean.

Catherine Ferry sang Un, Deux, Trois with such energy in 1976 that she came 2nd and made it to the Chow Down to Eurovision 2013. No matter how hard I try I just can't get the clap, I hope you have better luck. 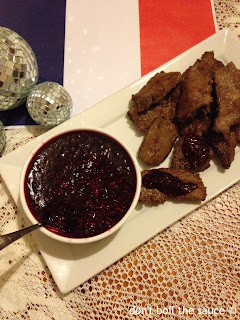