This morning I woke up feeling like my I’d partied like it was 1999. The thing that annoys me most of all is that all I’d drunk was blood orange soft-drink, not the 8 bottles my head was carrying on like. I tried water to relieve it, the pressure point hippy method and then resorted to pills. As I lay on the lounge dying as only a bloke can, all I could think about was bacon and eggs. There is something strange about the way the body craves salt and grease after it has rejected anything else you consumed prior.


In my state there was no way I was going to be about to leave the lounge long enough to stand at the stove to make bacon and eggs (I know a whole 10 minutes), so I made a pie. An old favourite the egg and bacon pie or fancier pizza rustica as it is known in Italy. There was nothing fancy about my pie; it could have been on an anti-binge drinking commercial, “how will you feel tomorrow, if your baking looked like this?”
It was thrown together with what I had in the fridge. While nothing fancy it was dead simple and could be put together in ad breaks of the Ted Danson movie knights of the South Bronx, nothing better than an underdog movie when you are feeling poorly.


·         Add a knob of butter to top and bake at 200 degrees for about 45-55 or till golden and firm, usually just before the underdogs come good and win the tournament.


You could do this all in one go without stopping to watch TV and it would probably take 5 minutes to prepare.


It hit the spot a treat and feeling much better for it. 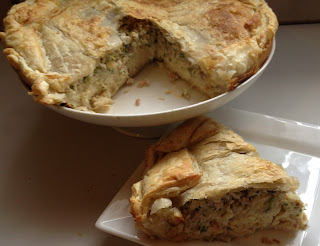