I like to do a periodic clean-up, the one where you decide to empty the cupboards to throw out anything you don’t need, but spend the day going through the gems you thought you’d lost forever. This is followed by the several days of it all staying out because by the time you have reminisced with old items, you’re too tired to put it all away.


In the latest endeavour I discovered an old recipe book I had complied years ago, before the internet was on phones and just computers.  A few odds and ends, a Nigella salad recipe I had seen, a few magazine clippings but the prize was a Women’s Weekly recipe card.


I’d had a complete set till they didn’t survive a clean-up about 100 years ago, then I managed to find a set at an op shop, I’m hoping they have survived but I’m too scared to look.  If all else fails there is always eBay!


The card was for a recipe I first started making when I was a child, crisp coconut biscuits.


This latest batch was a glorious trip down memory lane, and prompted the question “are you going to make the Georgie Parker cookies too?”  So named because she was on the cover of the Women’s Weekly that month, “yes I think I must” stay tuned. 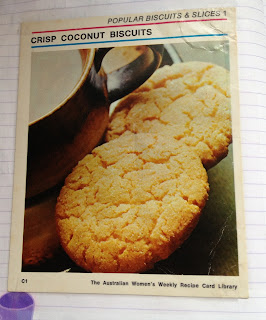 I also used this recipe in mini spring form cake tins as a pastry base. 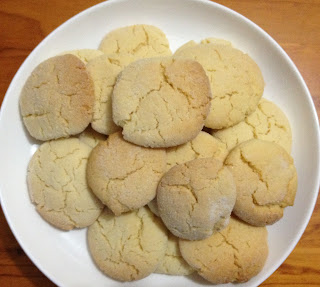 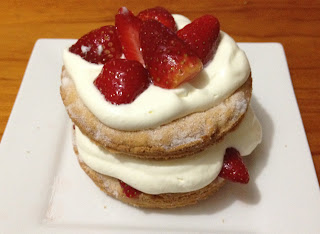 This little treasure was the cake tin bases with cream and strawberry, all natural it's almost a health food???
Posted by Don't boil the sauce at 12:01 PM