Hard to believe we are already at week three of The Great British Bake Off and it's bread week. (or that it's really week four and I hadn't written this one up)

I discovered this week I would be a reality show producers' dream. (I hope they are paying attention now)

Being bread week I was quite confident this technical challenge would go smoothly. I can't remember the last loaf of bread I bought and to further enhance my confidence I had previously made Paul Hollywood's ciabatta recipe.

I was even confident enough to tweet that I hoped my bake was more successful than the spelling in the GBBO book! 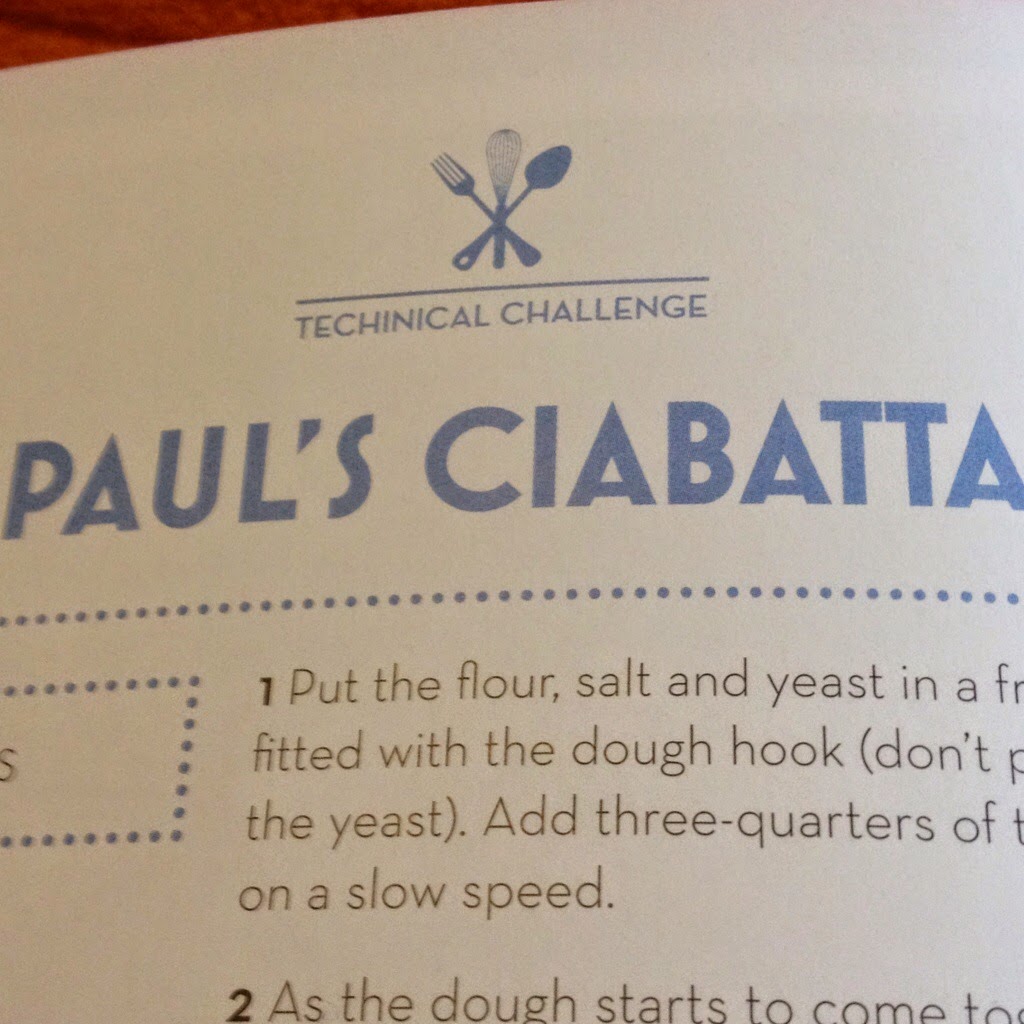 So while I thought I was on the highway to success, a producer and potential audience would know this kind of confidence had me plotting a course straight towards a doughy iceberg!

The original recipe posted on the bake off site had half the dough resting for 6 hours which I thought was interesting for a 3 hour challenge, though Paul from Beer and Baking did suggest that the BBC has access to the T.A.R.D.I.S. so it all made sense. 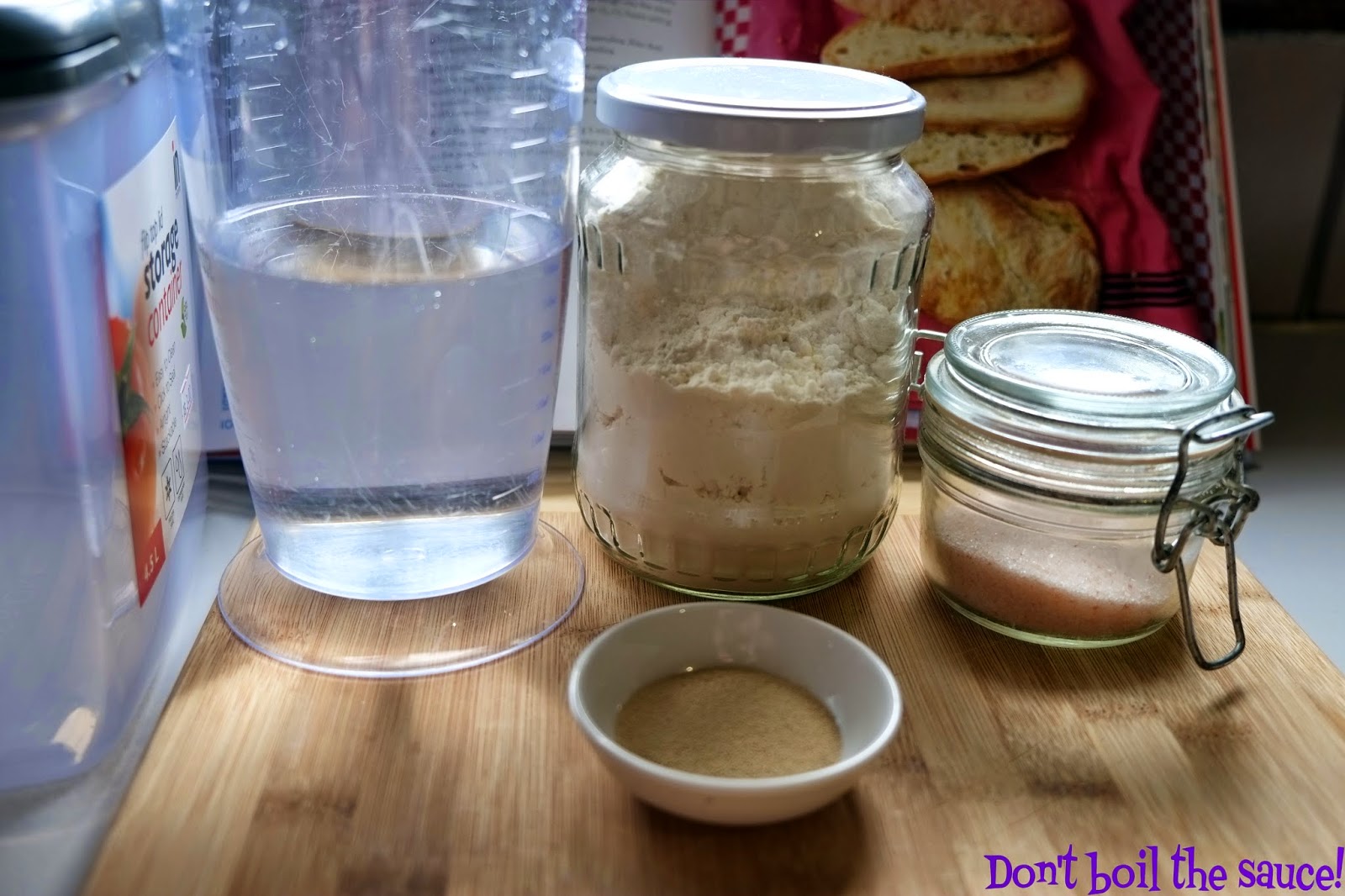 While I already have the current GBBO book I haven't read the recipes for the challenges apart from the equipment list just to make sure I had everything needed.

So the clock begins, the flour, water, yeast and salt are kneaded into submission for the sake of such a heavenly pursuit as bread.

The live tweets go out for those that are following alone and home, and to my delight there are people following along at home. (you can too, twitter #lets_get_technical or @dbtsauce Sunday afternoons Melbourne time) 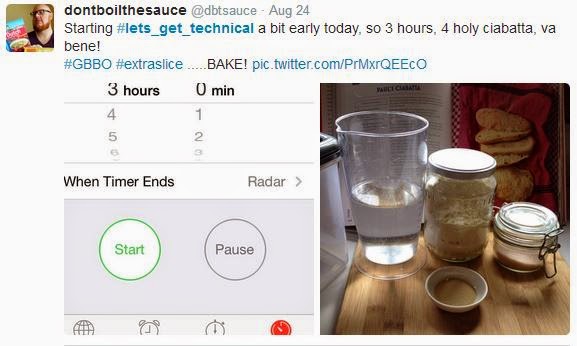 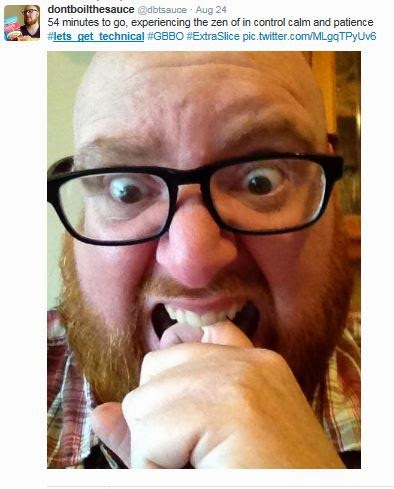 And so we now have some more additions to my every doubling in size collection of pictures of dough...(yes I know what I did there) 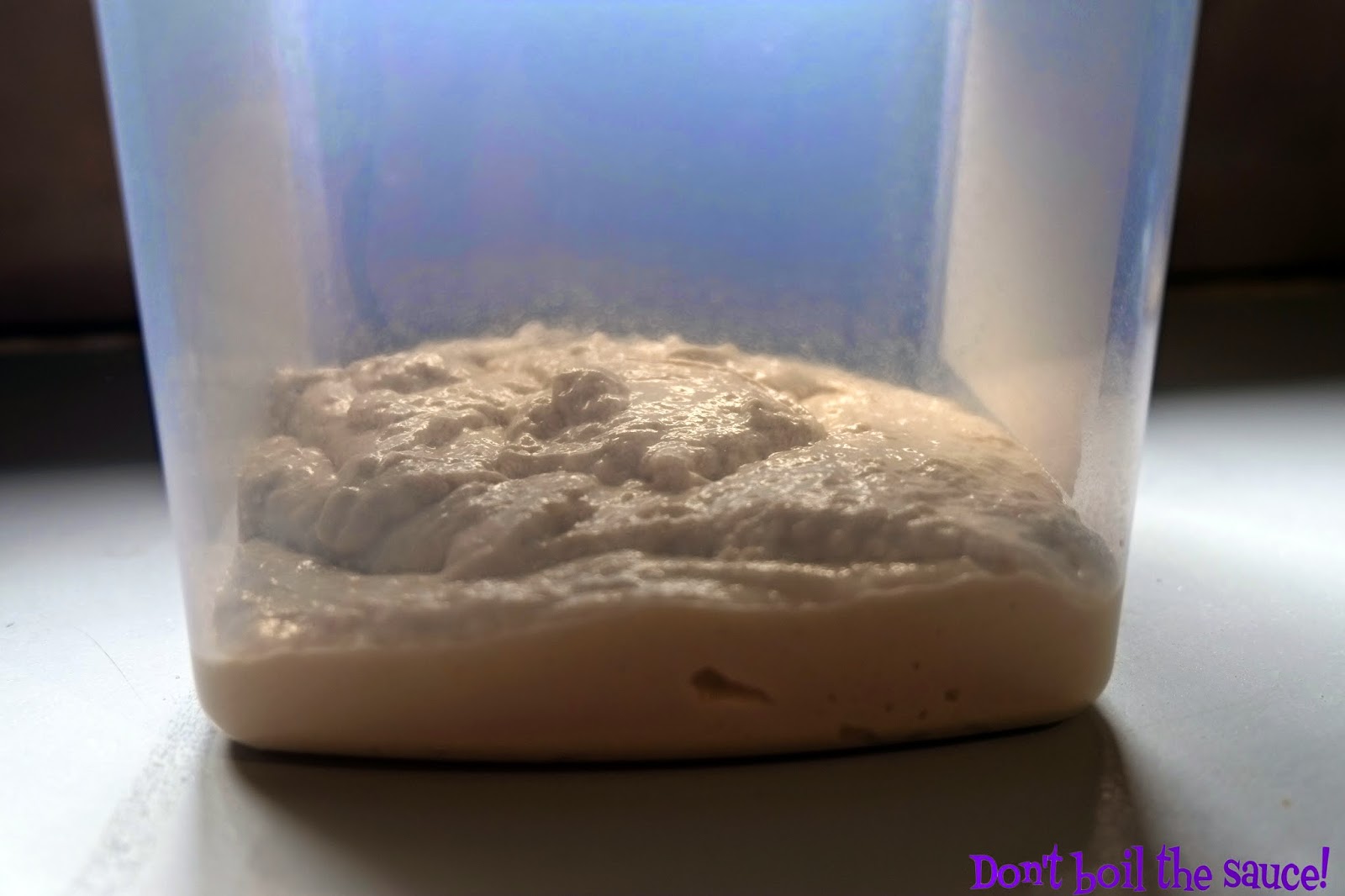 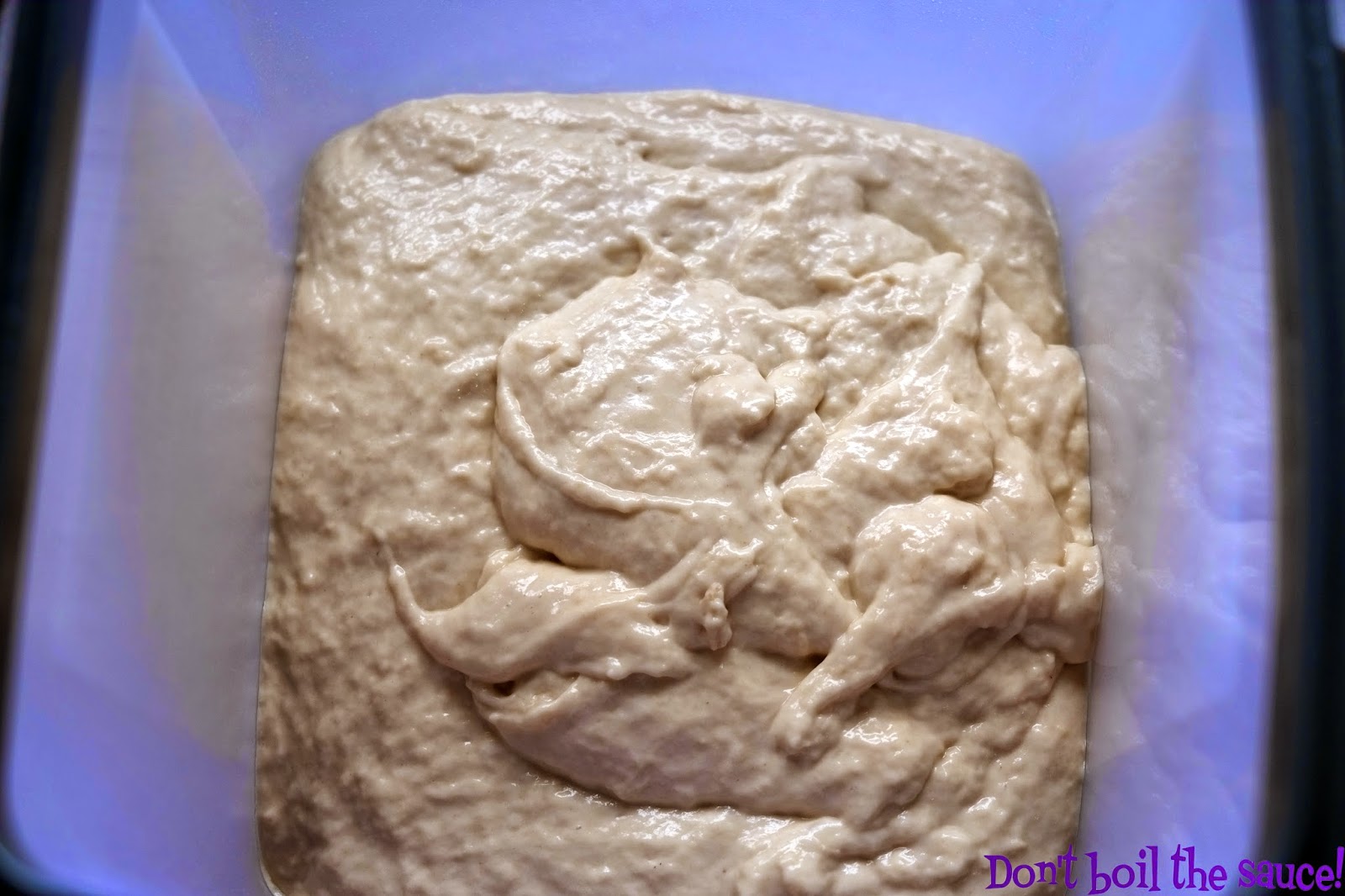 There was a moment of worry as the dough wasn't rising as high as I would like, but my tub was 4.5L rather than the requested 3L, so there may have been a little more girth than height. 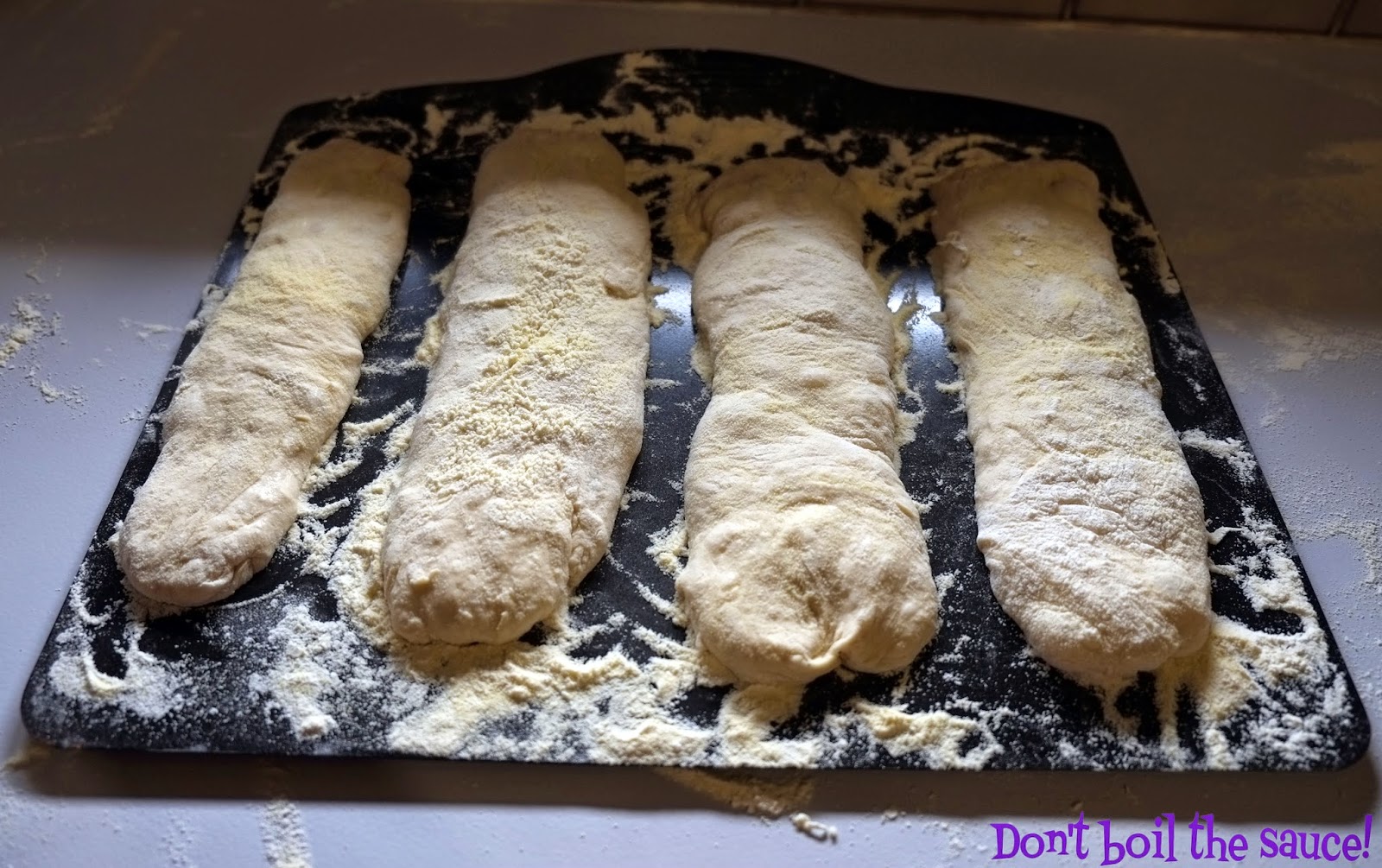 It's a challenge gently handling and shaping such a moist dough for the fear of losing the air. 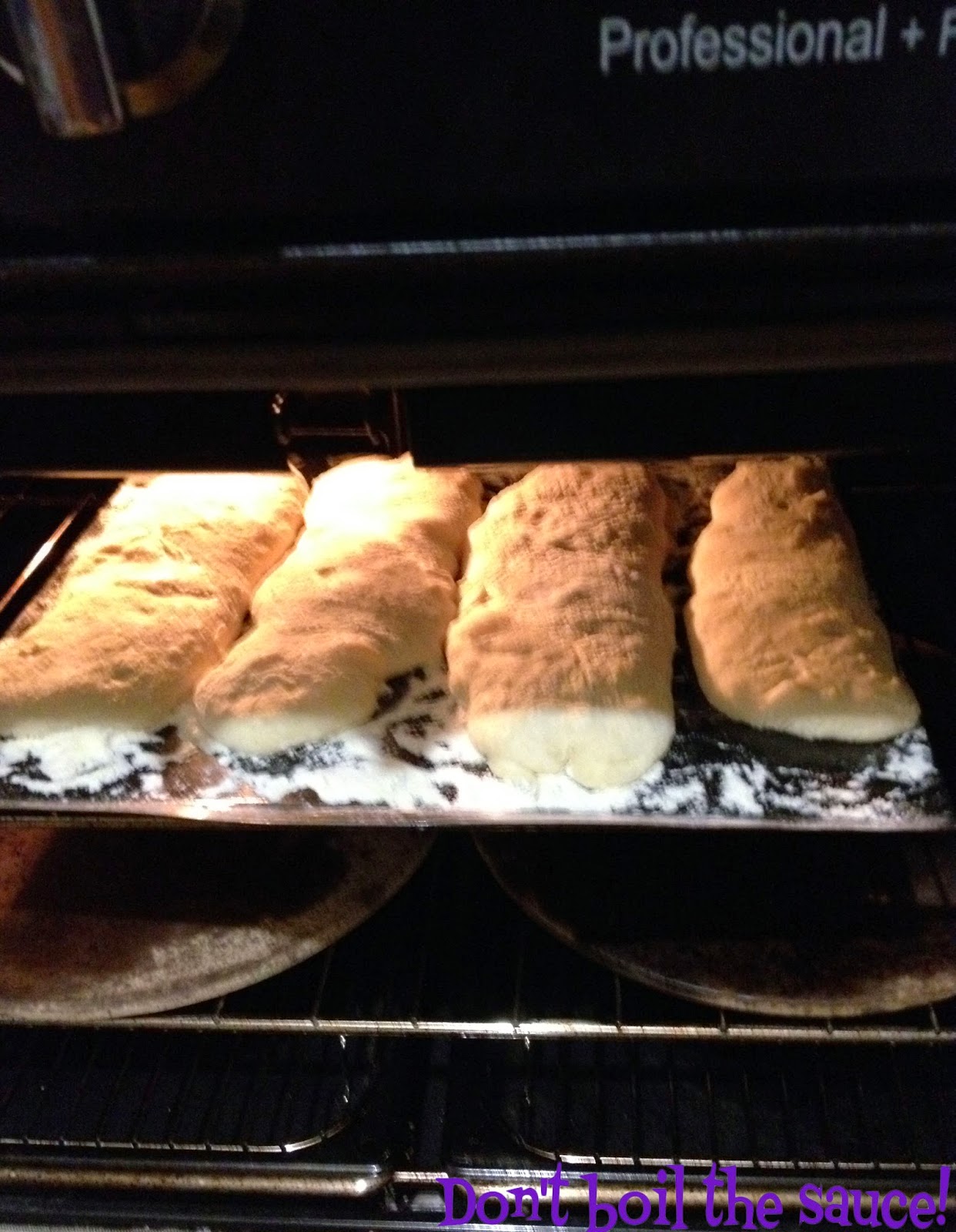 As you can see my oven is "professional" and has the option for fan forced or not, which is great as long as I remember to choose the correct one. 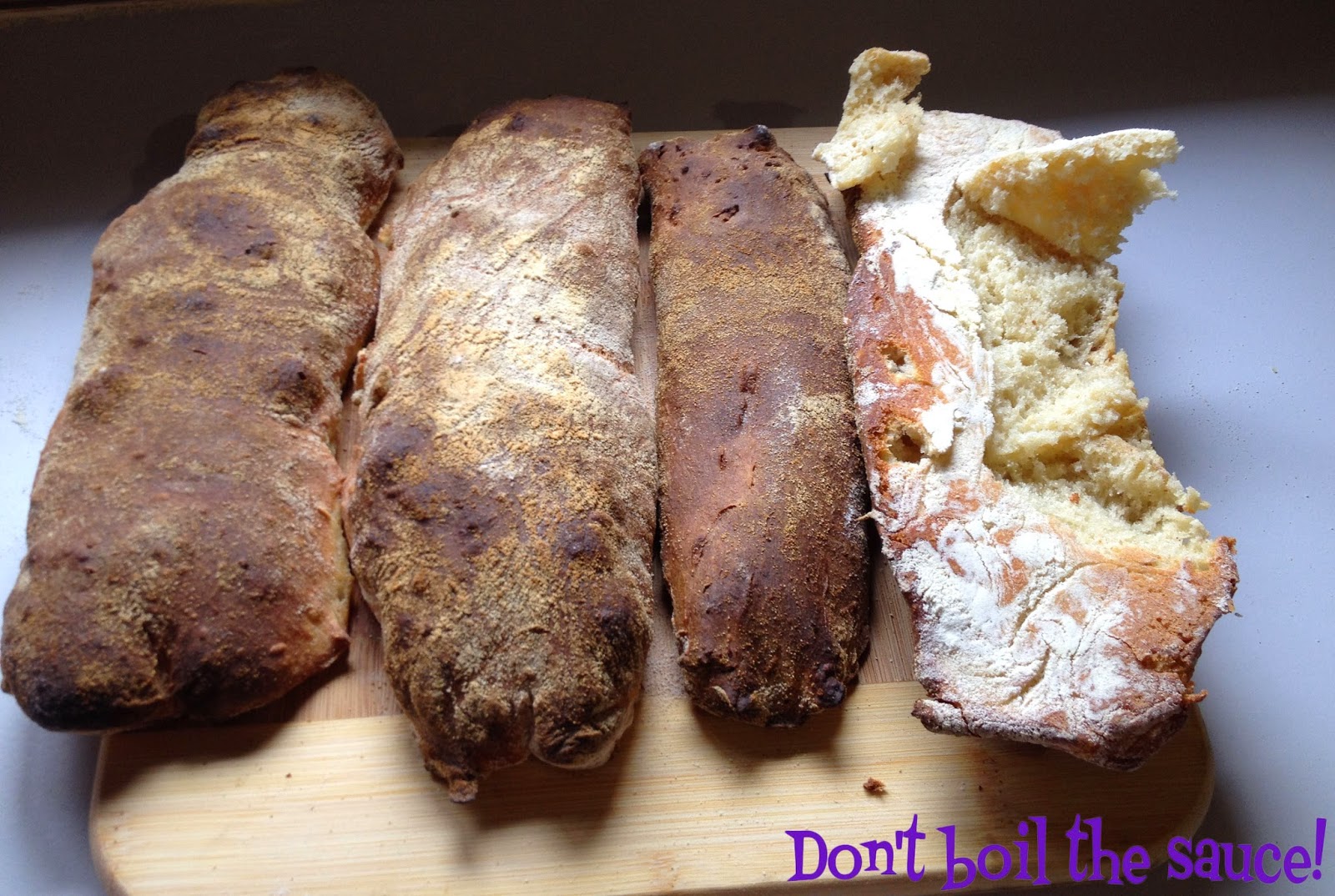 Yes, well,  live tweeting the event may take away a certain level of concentration!

Being that it's my challenge I figure I can make up the rules, so I started again.
It would be a shame if I got eliminated from my own house! 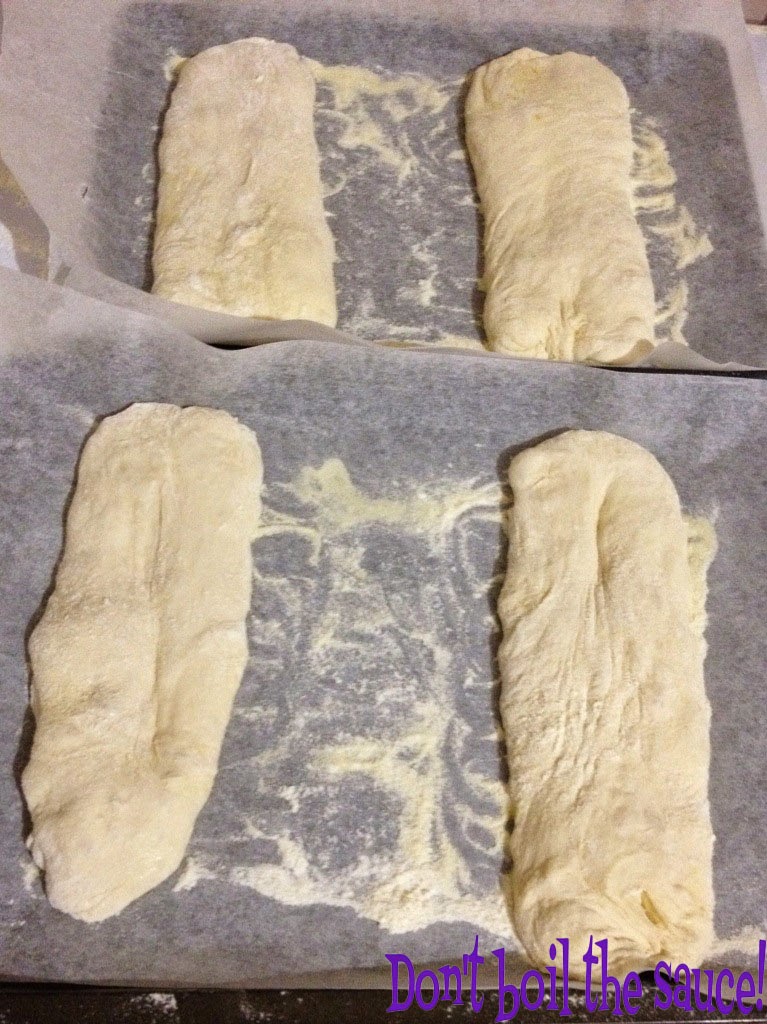 And sometimes you just have to go with what you know and line the tray and finish it on the baking stone. 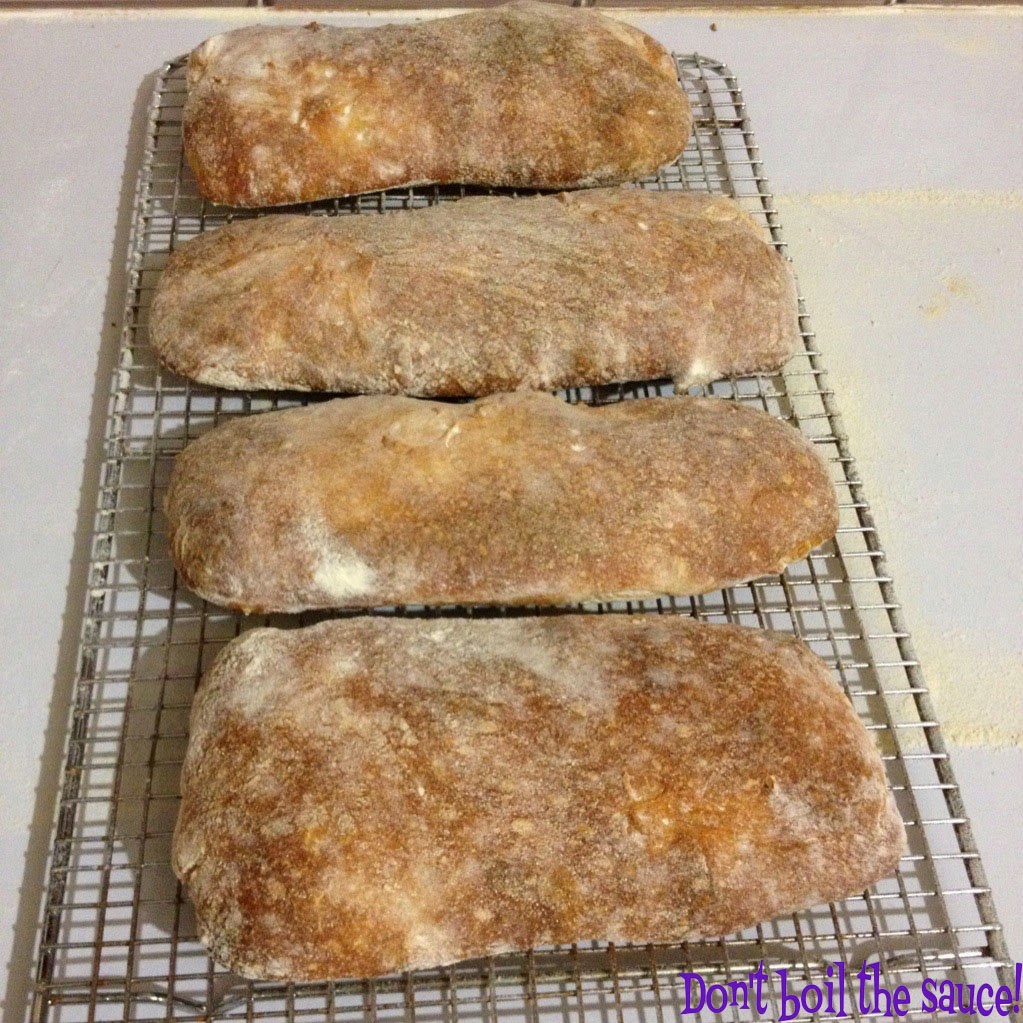 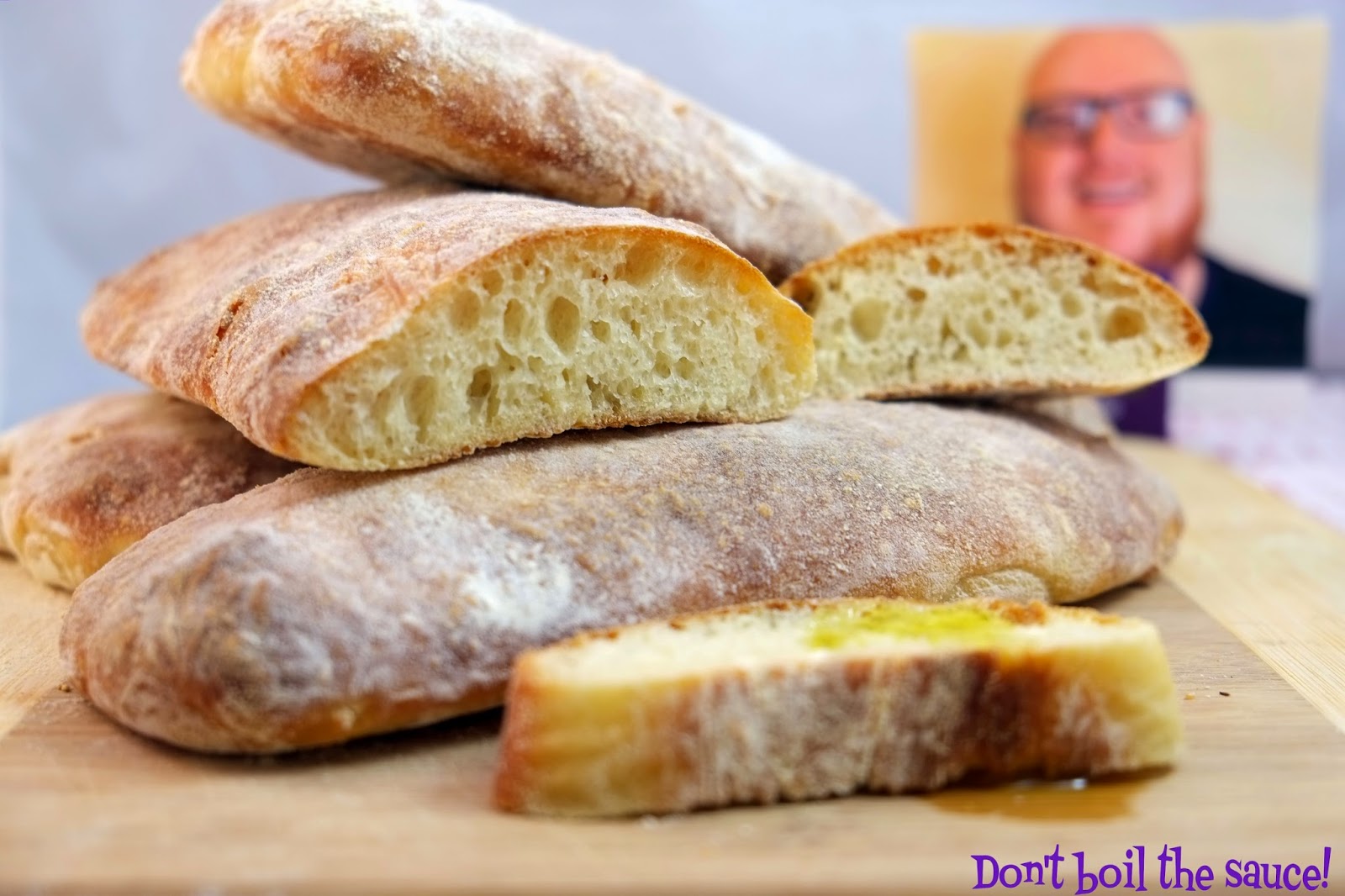 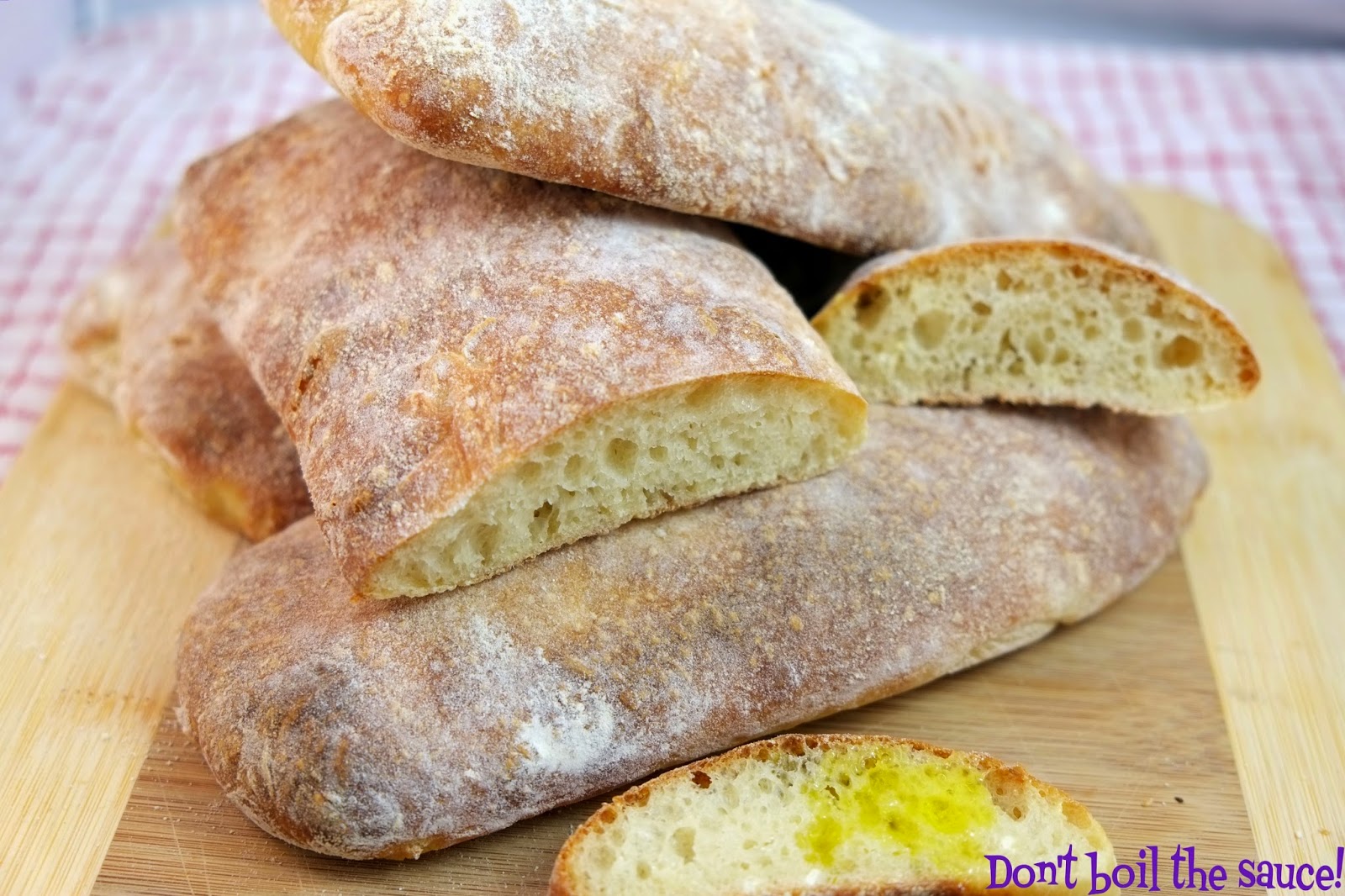 Could be more holey but was a lovely breakfast with some avocado and bacon!

Next week (well this afternoon) I'll have a go at Mary's Tiramisu cake, which could lead to a falling out with Mary all over a certain ingredient I "sort of find unacceptable...."

Be sure to tune into the drama as I'm also cooking my Mother in-(should be)-law's birthday dinner at the same time..... multitasking woo hoo!

Email ThisBlogThis!Share to TwitterShare to FacebookShare to Pinterest
Labels: bread, Let's Get Technical