At My Tradition......
It is all about the magic of Christmas.

If there is a rehab centre for Christmas I would be a prime candidate, behind Eurovision, AB, Italy and cooking it one of the loves of my life.

I am such a child at heart with all the lights and decorations and have been known to clap with joy and exclaim "look it's Santy in the windie" (Santa in the window) when passing a decorated house.

There are times when I can also admit things may have gone a little too far but I think Christmas dinner was enhanced by the smoke machine creating that lovely illusion of stepping into the North Pole workshop............. 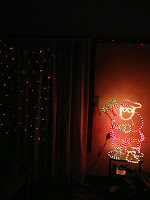 An internal Santy near the windie 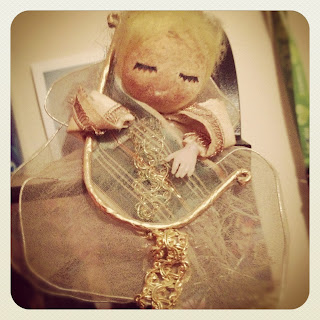 Doreen has featured here before but she will be with me till the day I die, no matter how unkind time has been to her. DOREEN STAYS WITH ME!!

I used to tell a story in my show about how we had not always been friends as she would be the one to inform Santa re the naughty/nice spread sheet. I would get the gentle reminder "Doreen's watching you....."

Allegedly I stormed up to the Christmas tree and abused Doreen for being a dobber and told her that Nan says dobbers die early so she should watch out!

The fact I was 24 meant I really should have worked out it was the mirror not her. (have I still got it? That used to always get a laugh....and also I was only 4, no really I was) 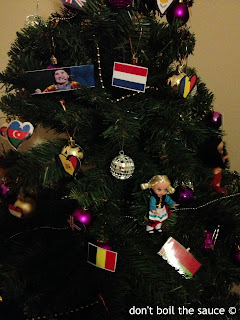 Of course it is a Eurovision Christmas tree, was there any doubt?? 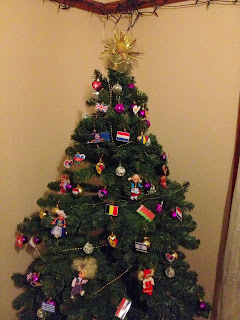 One of the other reasons I love Christmas so much is that I also get a Birthday the next day!!

This only proved problematic the second or third time this scenario occurred. (I'm not sure of the exact age)

Now imagine a 2-3 year old that wakes up the next morning to a mountain of presents.

Now imagine a 2-3 year old that wakes up the next morning to nothing....WTF WHERE ARE THE PRESENTS!!!!

I had lived up to my end of the bargain and gone to sleep so where the hell are the presents people.

I may have been a little high maintenance as rumour has it Pa re wrapped some of the past 2 days presents and I was content.

I'm not sure what happened on the fourth day but they may have just slipped me a Phenergan, it was the 70's.

Thankfully AB is onto it and is well prepared for this phenomena. 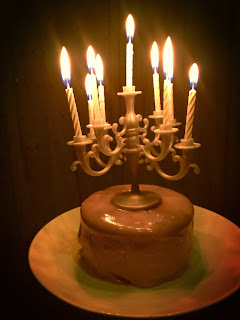 Now for someone that loves Christmas this much there is only one job that is perfect right? Or so I thought........ 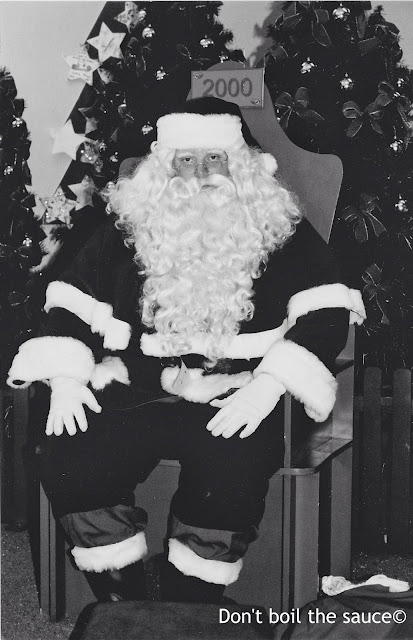 I was over the moon I had quit my day job,  just moved to Melbourne with AB and was working fulltime as a performer. Surely it was only a matter of time before my falsetto would ring out with a "Christine, Christine...why? (half sob) why?" from the roof of the Princess theatre, to then go on to win the Eurovision Song Contest.

Well let's just say helping out the big fella from the North Pole nearly killed all my Christmas dreams.

After finishing Santa School which was basically a 300 page document of don't have bad breath, don't touch the kids or ruin the illusion by telling them you could have been in Neighbours last week, I was ready to spread the magic of Christmas.

Being Santa is a bloody hard job! Apart from the fur in an Aussie summer or the 8 hours on the wooden bench, or being 4 inches taller than the last Santa (see the pants) you have to be able to catch babies.

Seriously once a baby stops crying they are flung into your arms for that 2.8 seconds they may smile for the photo.

I mean really people no cushion for Santa?

It was here I learnt to juggle by holding multiple children, so they didn't fall, were facing the camera, all while maintaining very visible hands at every moment.

There was also a lot of direction from the photographer about having laugh lines showing in my eyes.....Love, I'm 25 I aint got any laugh lines which may have led to story behind my eyes in the picture, just take the bloody picture.

Some of the most memorable people to visit Santa:

My favourite visitor of all time was a little girl, let's call her Madeline who was so obsessed with Santa that she managed to keep my dream alive through all of the above.

I do need to mention that with the beard and the wig (yes they weren't nature) you have zero peripheral vision, nothing, it's like having blinkers on.

So after I had shared the Christmas spirit with Madeline and security had prised her off me I moved on to chatting with the other children.

I kept feeling something in my beard, kinda like a fly but as I moved my hand to shoo it, I found Madeline was back.

She had come with a bucket of hot chips and was trying to feed Santa, all I could think was I'm not a KANGAROO!

Looking back I think what a lovely gesture to make sure Santa had some lunch while chatting to the other children and I do hope that she is out there somewhere still loving Santa as much as she did then.

While my dreams didn't get me to the Princess theatre I did play the role at the West End.........that is the West End market in Sunshine, not quite Shaftesbury avenue.

But for me that was the end of my days helping out the big man in red, I wouldn't do it again not even if he asked personally.........If you don't believe you don't get the presents! 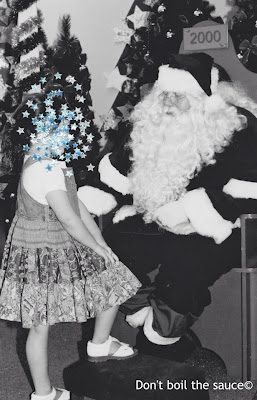 This is not Madeline (no hot chips) and I have no idea who it is hence the concealment of her identity, either that or she has grown up to be a dentist or on crime stoppers.

Thanks for seeing what's At My Tradition, why not check out other peoples traditions here.