The continuing story of Dwhite and Ryelene.......

Like all good 80's soap operas Ryelene who was dead and buried has now made a return. 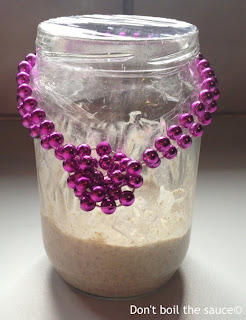 The harrowing back story involves Dwhite selflessly offering part of himself as a host to the gorging rye flour to emerge as Ryelene thus bringing the siblings even closer together and making them one entity.

The other option is that with the transformation from Dwhite to Ryelene this will feature as my first transfloured starter.

Either way the new Ryelene looks like she is back stronger than ever. The picture gives a hint of an 80's power shoulder pad promising she will now be a force to be reckoned with.

Stay tuned to see what happens in the next gripping episode of Days of our Ryes.
Cue music....
Posted by Don't boil the sauce at 12:50 PM